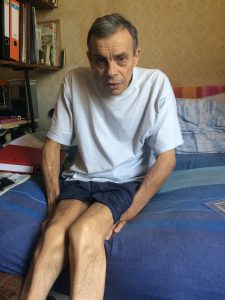 I met a man yesterday, who is a soldier. He has been one for 48 years. This man is a soldier who weighs 37 kilograms and is in a wheelchair. He has been this way since his tragic accident during military service. An accident. One involving a russian military truck, a secretary of the communist party and the remains of the soldier’s small car, smashed while he was inside.

After his accident, the man was sent to the morgue. There, the doctors who had been sent to issue his death certificate ascertained that he was still alive. They proceeded to perform surgery on the man’s cervical vertebrae, thus restoring his ability to move the top part of his body. From this point on, the soldier and his sister began their life together… somehow. They have been living a life they would not have imagined possible. They have been alone since their parents died “of grief”, as the soldier keeps saying. They have no family, no children, no grandchildren, simply nothing. They only thing they have to their name is a small apartment, a few small rooms in an old apartment building. Their bathroom has a bath tub, where the soldier’s sister would help him bathe. It takes up almost the entire space. The two siblings also have a cellar and a basement, which are often subject to burglary. The soldier has a bed where he basically lives. He also has a telephone, a laptop and very many folders… It is in those folders that his life’s story is kept. Inside, there are copies of legal documents, experts’ statements, x-rays, results from medical procedures… All of these things have been imprinted into the soldiers mind. He remembers it all vividly, and telling me his story took him almost two hours. 48 years in two hours. 48 years, people!

When I waus born, this man had only just returned from the dead and begun his life. For the past 48 years, this man has not stopped shouting, “I’m alive!”. No, he never was a war hero. There are no medals of valor on his chest. You will not see him parading with his company. His “medal of valor” is his will to keep on living, even though his legs are as tiny as a child’s, even though his hands tremble in weakness and he cannot lie down lest he suffocate. Perhaps it is this very trauma preventing him fro lying down that keeps him ever vigilant, so that he may strive to carry on. He would go on living, despite everything, staying awake, so as not to die. This soldier’s story is a perfectly obvious allegory for his country’s existence throughout those 48 years.

But despite the limitations brought about by this, he hasn’t stopped fighting for something as simple as being properly diagnosed and treated. An operation could change his entire life. Since his accident, this soldier has met all the “greats” of Bulgaria, every neurospecialist, surgeon, hospital director, all the ministers of all the governments, every president… every commander in chief. After all, he is a soldier. His fate is in the hands of his commanders in chief. And, being a soldier, his future is in the hands of the state. By law, the state owes all soldiers for their service. This man has been handicapped as a result of that service… “Yeah, right!”

In the folders are kept results from medical tests performed in Hannover, Vienna and Tel Aviv. Doctors are adamant: his is a case that even a student of medicine could diagnose and a surgical procedure could restore this man’s ability to move. High courts in Bulgaria most of which military have been notified of this. Legally, his treatment should have been paid for, but documents have been vanishing mysteriously. One document, however, keeps coming up. A document issued by the “greats” saying the man’s spinal cord has been severed, so an operation would be pointless…

So the soldier can’t go anywhere to be treated. For 48 years.

Two months ago, the Judge Advocate General’s Corps started an investigation. They have all the documents. They have all of his information, his stories, his memories. Something has begun, but we see no end in sight. How long will it take? Nobody knows… When asked, “Why don’t you sue the state?”, the man just answers, “Who do I sue? He does not wish to sue anyone. He just wants to live. He is still that 20 year old soldier. He even looks it, as though time stopped for him that year and he is stuck at that age, his entire being anticipating the bright future, full of youthful aspirations and desires. His face is young, his body, fragile. He never had a lover or a wife, nor any children. This man is still waiting for the act of kindness that will change his life.

This soldier is the same age as my father. That very same year of the accident, 1967, my father was also doing military service. The only difference between the two of them was that one was in a morgue having been crushed by a military truck, while the other one was jumping over a fence to get to the maternity ward… It could have easily been the other way round.

Or even I could have been that soldier. Or you… But we aren’t.

What could, however, try to be the Commanders in Chief who will change that man’s life.

The soldier has recently found that very few hospitals in Europe could treat an old trauma like his.One of them is in Israel. The procedure costs around 50000 dollars. So let’s not wait for the verdict of the JAG Corps. Let’s not wait for the next president Commander in Chief to review the soldier’s case and act in a way that would make us scorn everything reality throws at us. Let us be the Commanders in Chief and let it be our verdict that this soldier should continue to live.

I have written this, because I would like you to know this man’s story. I take it as it is, and I do not wish to delve into it, to scrutinize it any more or cast any doubt. All I want to do is help this man, so that his faith in kindness would be restored. I want to be his Commander in Chief. All of us could become his Commanders in Chief. Now, this soldier is lost at sea. He is like a windsurfer forced off his board who can no longer get back to the shore. But when you go into the sea, you should always let someone know, so when you don’t come back in time, people would go looking for you.

I am that someone and I am telling you: there is a man who has been lost at sea for 48 years.

Please give your suggestions as to how we might find a ship and gather people. How do we save this man? I can tell you exactly where he is…

You could help the soldier get a life-changing surgery by donating here: 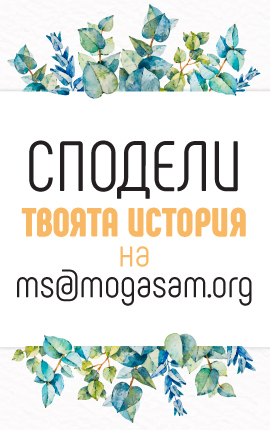